What Is Ranked Choice Voting?

Ranked choice voting (or RCV) means that when you go in to vote you have the option of ranking all of the candidates running for each office.  Why would you want to do this?  Great question!  Below are just some of the reasons for and benefits of it.  But before we get to that, here's a quick 2 minute video from our friends at FairVote that explains how it works:

MAJORITY WINNERS: Ranked choice voting requires a majority of 50%+1 vote to win an election.  Very simply, RCV requires candidates to consider more than their base in order to win.

MORE REAL CHOICES: With ranked choice voting you can vote your conscience as your first choice and still pick whichever party you lean to as your second pick.  With RCV independents & 3rd party candidates have a much more realistic chance to compete and win!

MORE CIVIL & ISSUE-ORIENTED CAMPAIGNS: Attack other candidates & you run the risk of alienating their supporters, and remember, in an RCV election you need to appeal to more than your own base.  A candidate can't afford to alienate their opponents' supporters because they may want to be listed as those voters' second or even third choice.  RCV incentivizes candidates to stick to the issues and their proposed solutions to the problems.

SAVES TAXPAYERS MONEY: There's no need for run-off elections that often have far less turnout.  In Jacksonville it costs $1.2 million to run a round of elections, regardless of how many offices are on the ballot.  Imagine if every city/county in the state of Florida that has run-off elections as a part of their local elections was able to eliminate that and repurpose those funds towards other worthy expenses such as teacher/police/firefighter salaries & equipment.

POTENTIALLY SAVES LIVES:  Now in the age of COVID, anything that can safely reduce the number of times people have to go out and vote in person is a benefit to public health and their own health as well.

REDUCES VOTER FATIGUE: All of the benefits listed result in shorter and more pleasant election campaigns, sometimes up to 8 to 12 weeks shorter, and voter turnout tends to increase as people become interested & excited to vote under a new way of doing it.

SAMPLE RCV BALLOT / HOW IT WORKS: Just like it shows in the video, below is a sample RCV ballot.  Simply fill in one bubble for your 1st choice, another bubble for your 2nd choice, etc, for as many candidates running for the position as you like.  If you only want to bubble in a 1st choice and leave the rest blank, you can do that too!  When the ballots are tabulated, if no candidate has a majority of the vote, the candidate receiving the least number of first place votes is eliminated and everyone who voted for that candidate has their vote re-assigned to their second choice candidate and the votes recounted.  This process continues (done automatically by the voting machines) until someone has a clear majority of the vote. 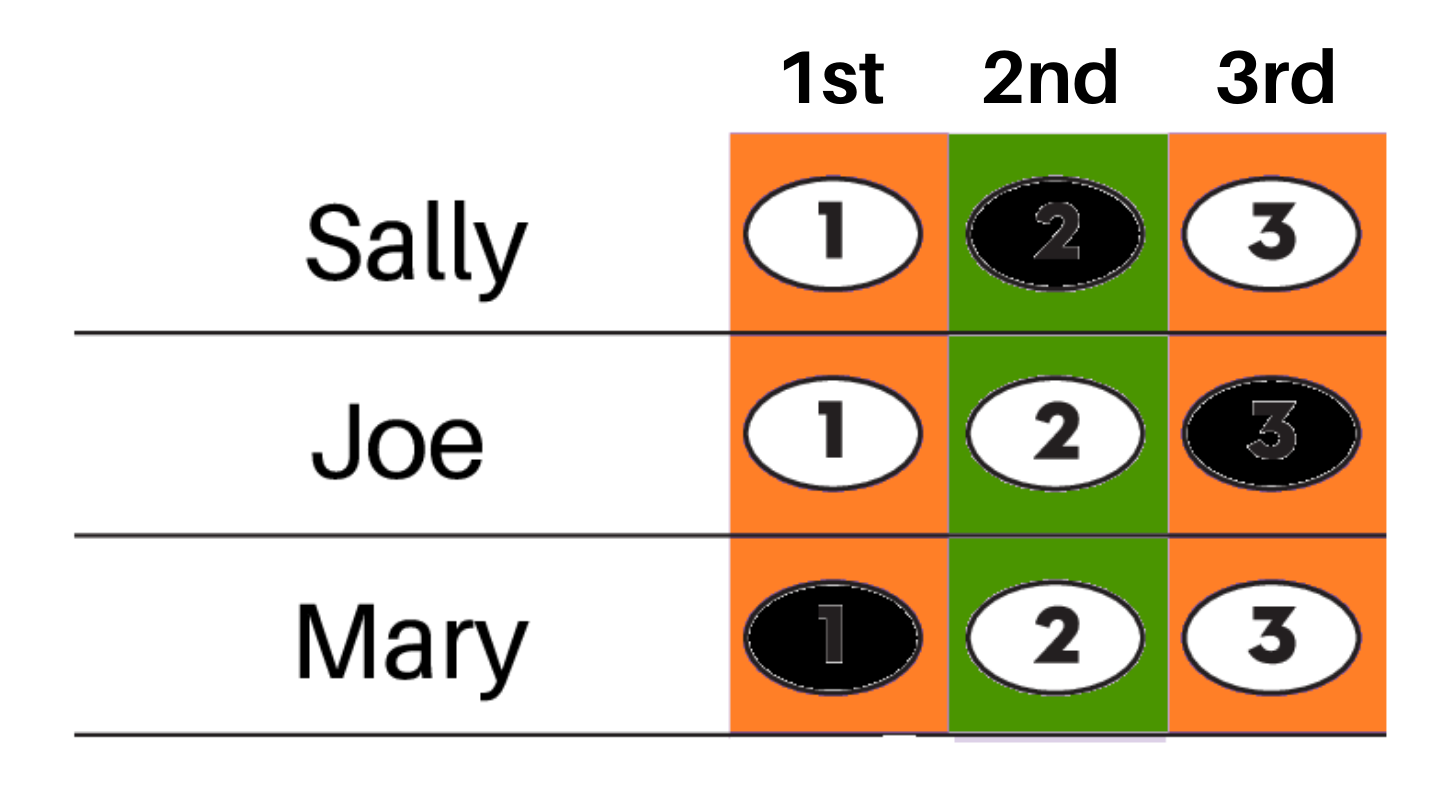 WHERE ELSE IS RCV BEING USED? RCV is already being used in 26 states to some degree.  18 cities across 8 states use it for their local elections.  It is used statewide in Maine and they will be using it in November 2020 for President!  6 states use it for overseas/military voters.  5 states used RCV in their presidential primaries in 2020.  7 other cities have passed it, including New York City in 2019!  50+ universities use it.  Australia has used it for over 100 years.  6 other nations use it too.  In short, it's been time-tested.  We hope you will help us make Florida an innovative leader in improving our elections! 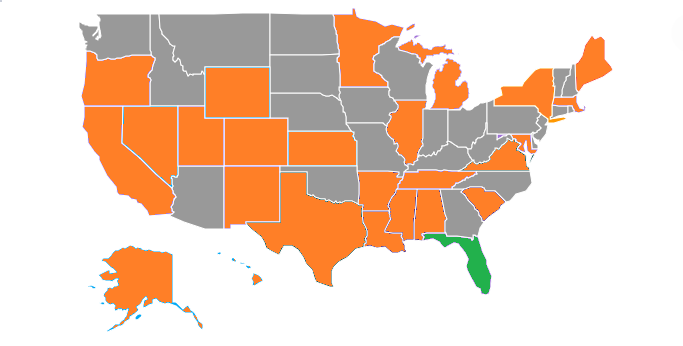 DID YOU KNOW? For almost 30 years and counting, if ranked choice voting had been used in Florida just for governor & president, we would have seen different results if those third party/independent votes were able to be reallocated using RCV.  Below are just some of the highlights you might not have been aware of: 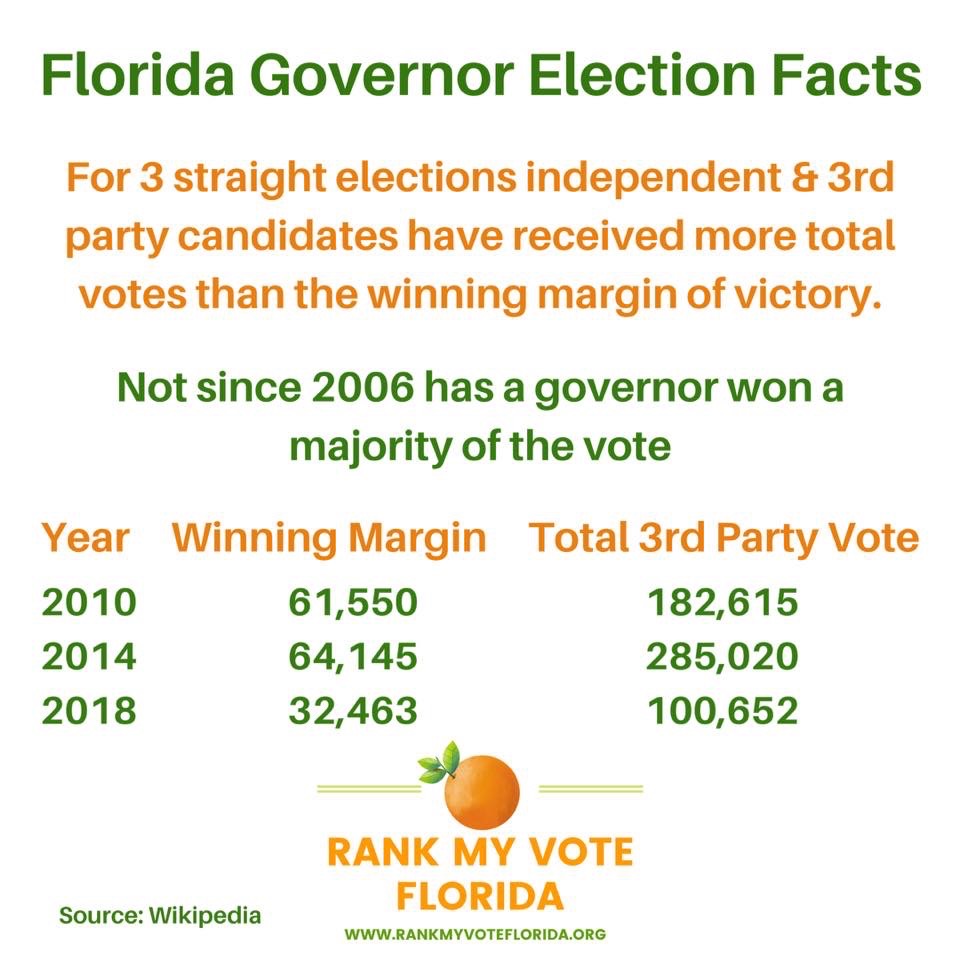 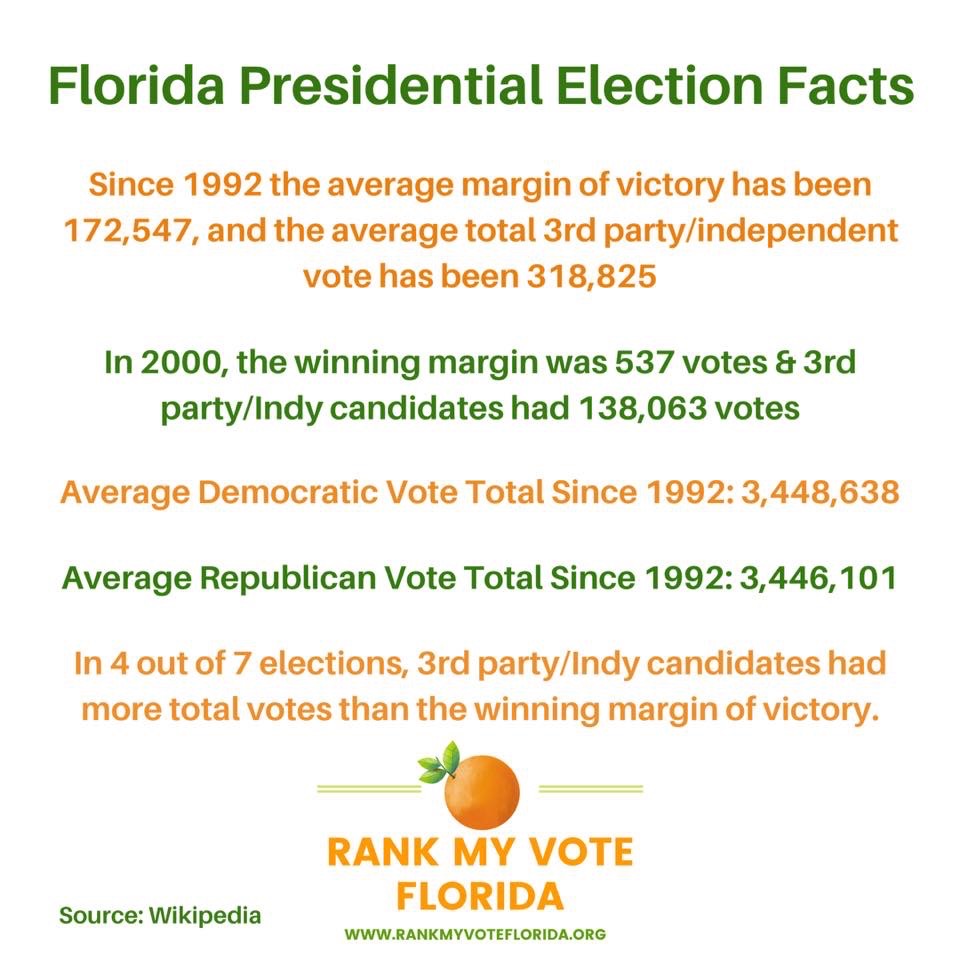 If you would like to learn more about ranked choice voting, our friends at Fairvote.org have a wealth of information and resources.

Created with NationBuilder – Theme by Tectonica